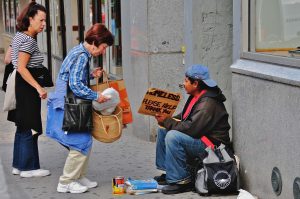 Our work on Altruism focuses on individual differences in what we call the “Altruism Slope”. Evolutionary models of altruism assume that there must be some fitness benefit to altruistic behavior. Initially, this was taken only to apply to close kin and that the likelihood of helping decreased as a function of the amount of genetic overlap with the recipient (Hamilton, 1964). Studies have shown that altruism towards a target decreases as their genetic relatedness decreases (Madsen et al., 2007). Other research, modeling reciprocal altruism as Social Discounting, similar to time discounting, has shown that the same holds for the social relatedness of the target (Jones & Rachlin, 2006). In this research they show that subjects value a particular amount of money given to a close friend more than they value that same amount of money given to an acquaintance. In our research we are including both types of relationship in our slope, including recipients from one’s own child to a stranger in a different country.

Some individual differences have been found in the social discounting literature, specifically that neuroticism increases discounting and agreeableness decreases discounting when sharing with strangers (Osinski, 2009). In our research, we are investigating the hypothesis that conservative values would lead an individual to have a steeper altruism slope than a person with more liberal values. This hypothesis follows from the fact that those with more conservative views generally make sharper distinctions between in-group and out-groups and, accordingly show stronger in-group favoritism. By contrast, those with more liberal views show more similarity and empathy toward outgroups. Hence, their altruism slope should be flatter.

The slope hypothesis was confirmed in both student and community samples: Those scoring higher on Right Wing Authoritarianism (RWA, Altemeyer, 1998) do show a significantly steeper altruism slope than those who are low in RWA (Carey & Paulhus, 2010). The confirmation applied to both self-report and behavioral measures of altruism.